Yesterday was my last day at Automattic. After nearly 6 years, it was time to move on, but it has been a rather emotional transition, filled with memories and tear-eyed smiles. I thought I’d share a few of my favorite moments so far.

My Automattic journey really started a few years before I even applied, in 2008. I flew to San Francisco for the first time to attend An Event Apart conference. By complete chance I noticed that something called WordCamp San Francisco was happening a day before AEA, and so I got a ticket (and the ticket was so inexpensive comparing to AEA)! In that WCSF2008 I got to start forming bonds that would change my life so deeply: I got to witness Noel Jackson speak about color manipulation in the Monotone and Duotone themes; I met Lloyd Budd (now Lloyd Dewolf), who gave me his Automattic business card (the first I got from an Automattician); I saw the brilliance of “Crazy Horse”, a project that would soon change WordPress dramatically, presented by Jane Wells (now Jen Mylo) and Liz Danzico (who’s not an Automattician, but a brilliant designer that I deeply admire). 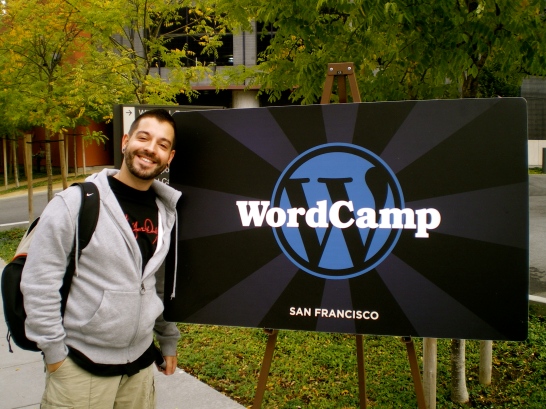 The moment I arrived at WCSF

I also met Matt and asked him for a photo in a geeky fan-boy moment (I can’t help but laugh at the shirt I was wearing saying “Who’s Your Daddy?” hahahah).

During the course of that trip, I also got to discover the Academy of Art University, where I’d eventually get my BFA from. That trip changed my life in so many ways!

I returned to Portugal incredibly excited to get involved with my local community – one that was basically non-existent – a one-man show of translating WordPress, by someone who would become a dear friend: Zé Fontaínhas. This interest was eventually what gave birth to the Portuguese WordPress Community that is alive and thriving today. In the meantime Zé became an Automattician himself (2009 I believe), and soon after started pestering me to apply.

Fast forward to 2010, I’m back at WordCamp San Francisco, this time I end up at the Automattic Lounge (the old pier) sitting next to Isaac talking about design, and helping Maya pack the goodie bags for WCSF. Later I somehow ended up at Matt’s apartment for an Automattician get together. I was the only non-Automattician there aside from Ana Teresa Fernandez (who I met there and who became a great friend), and Matt’s dad. The way I was welcomed, being surrounded by that incredible group of people (including shenanigans with Michael Pick) was what made me finally decide to apply! I remember befriending MT (now Matt Miklic) on twitter, and getting a message saying my application arrived right before their Grand Meetup in Seaside (and how excited he was to talk to Matt about it). Weeks later I had a trial that went through a couple of phases, but we eventually decided that I was to redesign Browse Happy (the damn thing is still mostly unchanged after all these years! ha!). After a few months (yes, my trial took almost 6 months because I had a very demanding full-time job at the time, leading a project at Público), I remember jumping on a phone call with Scott Berkun about joining his team (you can read about it on his book “A Year Without Pants“)!

February 1st, 2011 – Team Social – my first team. The time I felt the most fulfilled at any job I’ve ever had – I learned so much and hold dear so many great memories. I’ll share a fun fact: Team Social was the first branded team at Automattic. We had a hyper-customized P2 design (even with some progressive features that now everyone takes for granted in O2), t-shirts, and internal memes (all based off of this Russian propaganda aesthetic, with a mascot traced from the door of my favorite Russian restaurant in Lisbon, A Tapadinha)

After a couple of years my life got complicated and I was forced to take extended periods of leave from Automattic, with my move to San Francisco to pursue my Fine Arts degree (and the VISA/Work Authorization complications that it entailed).Off-and-on. Team Mobile and the redesign of the WordPress App for iOS7 (and one of the most memorable meetups ever in Tokyo). Off-and-on. Colors, Brand, the birth of the WordPress.com Design Handbook. Queeromattic (the start of the internal diversity team focused on LGBTQ Automatticians). Accelerate.LGBT. Off-and-on. Team Apollo (and getting more deeply involved with WordPress core). Off-and-on. Team IO (and Calypso).

Here are a few other random memories: (there are so many more, this isn’t even a blip of representation, but it’s what I managed to put together today) 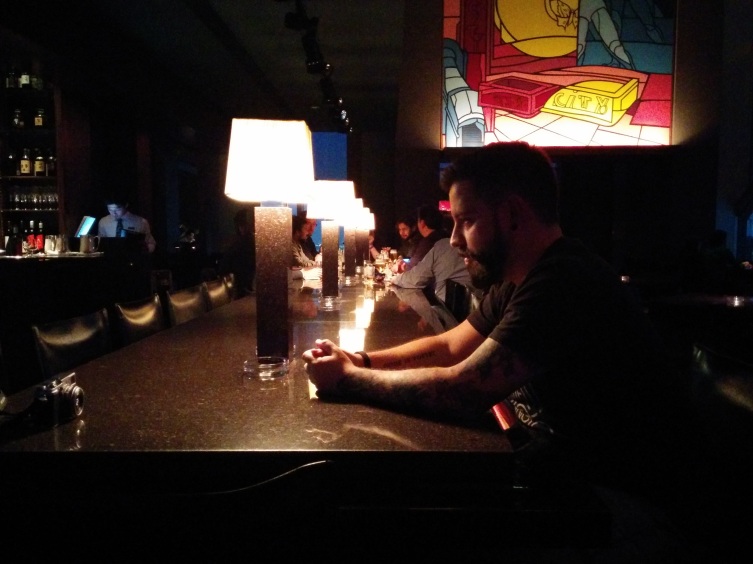 Team Mobile Meetup, Tokyo, 2013 – at the New York bar of the Park Hyatt, where Lost in Translation was filmed.

Hanging out with Anne after Accelerate.LGBT Austin, 2015 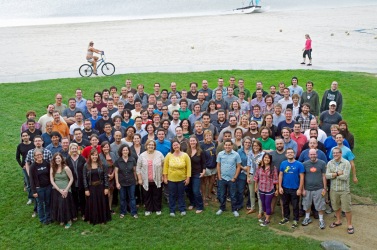 This brings us to now – and the emotional decision to move on. I can’t begin to explain how difficult it is to articulate all of the feels I’m experiencing. I will miss a lot of my fellow Automatticians on a daily basis, people who I’ve considered family for nearly 6 years. I won’t forget the memories and the adventures, the people I’ve know since the beginning, but also the ones I only met ever so briefly but formed some bond with.

Yesterday was an emotional day. Aside from the many beautiful, humbling, messages I received in my internal farewell post, I also got the opportunity to jump on a call with the incredible John Maeda, the new head of design (or, “Global Head, Computational Design and Inclusion”), who made me a heart-warming collage of photos and messages, something I’ll treasure. I also got to leave a little gift to my team – I rebranded it (inspired by the volcanic moon of Jupiter, IO, and 70’s NASA space exploration mission badges) and did a big customization to the team’s internal blog:

There’s also an easter egg in there that activates a nod to my alma mater, Team Social 😛 (it’s become quite a tradition to leave Team Social nods in things I’ve done, all part of the master plan of world domination or something hahaha)

It’s been a rollercoaster ride, with many ups and downs. But the time as come for me to take on new challenges, to distance myself a little from the WordPress.com vs WordPress conversation. I’ll remain engaged with core WordPress and the community, continuing with the weekly design chats (every Thursday at 17:00UTC on #design in the WordPress slack), the 4.7 cycle, and joining WordCamp Europe’s organizing team (and I submitted a talk for WordCamp US that hopefully gets accepted!).

Thank you for these many seasons of love ❤

(video of the final curtain call for RENT on Broadway, 2008)

In daylights, in sunsets
In midnights, in cups of coffee
In inches, in miles
In laughter, in strife?

Five hundred twenty-five thousand
Six hundred minutes
How do you measure a year in the life?

3 thoughts on “Seasons of Love”